Surprisingly enough, the narrative well of “device that allows detectives to go into people’s dreams to solve crimes” is one that’s been gone to before. AI: The Somnium Files, from Zero Escape director Kotaro Uchikoshi, attempted it before to perhaps limited success, but AI was a cartoonish, narrative-on-rails game. The Signifier, from Playmestudio, is narratively much darker and closer to an open-world game than its competitor in the somnia-scouring industry.

You are Frederick Russell, an AI expert and science dude on assignment with The Government, tasked with helping them solve the murder of a big tech CEO. You do this by using your dream-machine, the aptly-named Dreamwalker, to interpose yourself into the late CEO’s memories and dreams to try and figure out what happened to her. It being a Black Mirror-esque adventure, conspiracy, intrigue, and questioning the nature of our relationship with technology ensue.

If I sound tired already, it’s because, truthfully, I am a little. For all the things I find impressive about The Signifier, and it definitely has a lot going for it, it’s let down in my view by a few odd technical foibles.

I’ll start with what I liked: the game’s puzzles are well thought-out. Their solutions are telegraphed by both context clues in the environment and occasional hints from the protagonist or EVEE, your robot assistant (you have a robot assistant, by the way, I might have failed to mention). I’ll grant that, going into it, I was at a disadvantage – I wouldn’t necessarily describe myself as the smartest cookie going – but I always got to the solution thinking “how did I not work that out?”, rather than “come on, how was I meant to work that out?”.

One example: in the game, a key aspect of the primary loop tasks you with going into the brain scan of a dead person and delving around in their memories to try and figure out how it was they came to stop being alive and start being dead. One repeated puzzle in the game has you dig out aberrant data and put it in the right place, after working out what it is. The first is a rectangle, topped by a circle, with a line through it – the hint was something with “rhythm”. If I’d been paying a little more attention, I could’ve identified that it was a clock with a weight coming off it, but this lack of insight is on my behalf rather than The Signifier’s; with a little lateral thinking, the solution is clear.

Narratively, the game has a lot going for it. It quickly sells you on a story of conflict between government and industry and fleshes out the battle lines ideologically clearly – do you fall on the side of the authorities, regulating technology for the protection of the citizens, or the business that eventually tries to court your favour, building new innovations faster than the powers that be can legislate to get it under control? I will admit that I found the opening titles a bit gauche; they were all a little “hmm yes tech ethics in the future, pay attention this is the theme” for my tastes, and more to the point it’s unnecessary: the game actually does a decent job of setting this impression up organically over the course of the story.

The graphics are very strong, too: the environments are good looking, and the people that populate The Signifier’s world look, act, and sound like real people with identifiable motivations. The high point was meeting a lady from one of the game’s Big Tech Companies – I walked away knowing exactly what (at least, what she wanted me to believe) she thought, where she fit into the widening conflict of the story, and roughly what her motivations were. She felt like a human being who might actually exist, which is not an easy thing to write convincingly.

What’s most important, at least to me, though, is that these areas feel alive: your apartment computer has a podcast paused halfway through. The whiteboard in your laboratory is covered in indecipherable, science-looking scrawls. The halls of the big tech company you’re invited to are architecturally impressive, but sterile and cold, almost uninviting – the devil under the surface, perhaps?

It’s a mixed bag, in accessibility terms: to its credit, in a lot of key areas, the work has been done, including subtitles for dialogue and in-game documents and regular objective reminders, as well as the game’s puzzles not requiring repeated clicking. There are missing features that would make the game better for players with disabilities, and there’s one that is almost egregiously absent which I’ll touch on in a moment.

This brings me onto my biggest gripe with this game. Technically, it feels unpolished. Don’t mistake technical polish for graphical impressiveness – I stand by my view that the game looks excellent in both graphical and user interface terms – but there’s a few things about it that just grate on me.

Scene transitions are often abrupt, taking you from the map almost immediately to your destination without any breathing time or fade-in inbetween. Spawn positions are odd – in the car park, I was sprouted in the corner facing the wall rather than the direction the game wanted me to go. Other characters’ walk cycles sometimes give weird results, floating out of time with their feet movement or snapping into place.

None of these things are deal-breaking, but it’s little problems like this that make this otherwise really good looking and frankly quite clever game seem less like a Steam release and more like an intermediate Unreal Engine project. What is deal-breaking is the lack of audio adjustment options.

For a game that often has quite loud and jarring soundscapes in its dream sequences, there should, at a minimum, be a way to raise and lower the volume. Ideally, you would be able to adjust the layers of audio – that is, the sound effects, voice, and music – to balance them appropriately for your experience, but volume control is a bare minimum requirement, and its being lacking is not acceptable, especially for people who are hard of hearing or with auditory processing disorder for whom the ability to control volume independently in games is critical. Its absence, especially this late in development, demonstrates a serious, even egregious, lack of forethought, and without it this isn’t a title I can full-throatedly recommend.

On my first session of The Signifier, I found myself thinking my eventual review would not be charitable. I tend to be quite nitpicky, I find the small things tend to irritate the most. I’ve since reconsidered that position. The Signifier has a strong story, the characters are believable, the puzzles are clever and well thought-out, the narrative is properly telegraphed – but there are a few serious technical mishaps, especially its lack of volume control that I regard as being an urgent and critical issue, that stop this techno-ethical tableau being everything that it could be.

The Signifier is available on Steam for PC.

Code provided by the publisher. 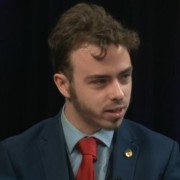 Harry Gowland
Harry is a writer for Parallax Media.
Previous

WHAT THE GOLF? Is Still As Delightfully Weird & Silly As Ever But The Level Editor Needs Work