With characters having abysmally low summon rates in Genshin Impact, you may find yourself struggling to find which character is best to fill the primary DPS role while maintaining the funds in your bank account. Thankfully, the game does provide a few dozen free rolls and, if lucky, you may find yourself as one of the proud owners of the coveted Diluc. If you aren’t that lucky (much like myself), Razor may be the next best option.

I would like to preface that this look at Razor does not take constellation upgrades into consideration. Considering this highlight is discussing his value as a budget and/or free-to-play character, I believe it is appropriate to take this approach. I will say, however, that Razor with all constellations is a menace that rivals even maxed five-star units.

This is all my opinion based on an early look, but I am always keeping an eye out on discussions and balance changes. Do keep in mind that this is not gospel, but an opinion. With that out of the way, let’s get into it, shall we?

There are a few things about Razor that have made him the primary carry of my roster, even amongst five-star units. First, he is a four-star unit, meaning his pull rate is exceptionally higher than that of the competition that exists within the five-star bracket. Not only do units like Diluc have a 0.6% summon rate, finding the specific one you want is even more of a daunting task.

Four-star units, the category that Razor falls into, have a 5.1% chance to be summoned. Not only do they have 8.5x the likelihood of showing up during a summon, you are guaranteed a four-star unit every ten summons. In short, you are much more likely to see a four-star unit. If you aren’t lucky with the free rolls the game provides you over time, you are able to spend an in-game currency that summoning gives you to buy Razor in the shop.

On top of being more easily obtainable than the five-star units, Razor can be built around a variety of elements in your party to much success. He can be built to be an elemental damage dealer, a physical damage dealer, or a hybrid. Due to this versatility, finding artifacts that fit him is significantly easier as opposed to a unit that primarily needs, for example, percentage Pyro damage. If you find percentage Electro damage but are building for pure physical, it will still be useful. Let’s take a look at Razor’s kit so that I can try to give you a better understanding as to why he is capable of either three build paths.

Having been raised by wolves for as long as he can remember, Razor has been nicknamed by the people of Teyva as “Wolf Boy”. His kit represents his upbringing well, as his only way of fighting is by tearing the enemy apart in melee range with sword and claw. 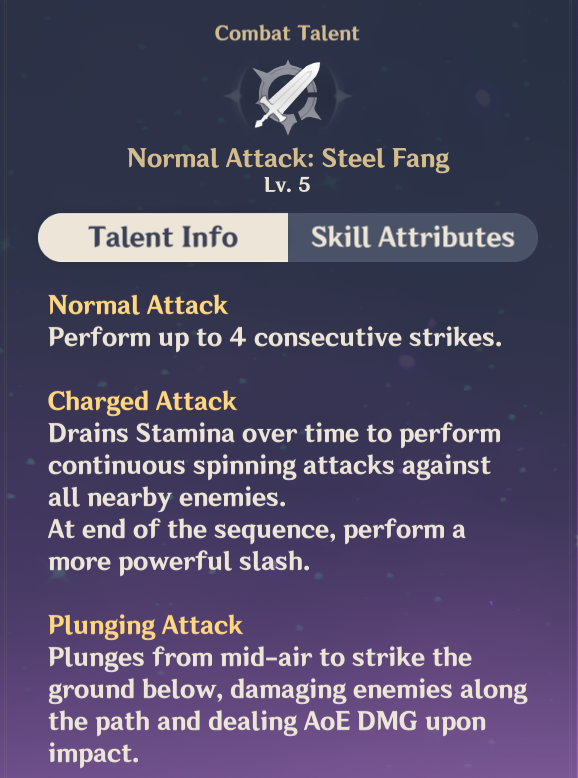 Similarly to every other character in the game, Razor has a basic attack combo that deals a different amount of percentage of your attack stat per hit. Your first hit will deal the 3rd most, the second will deal the 4th most, the third doing the 2nd most, and your fourth doing the most by a significant margin. The reason for the second attack dealing the least is because of how quickly it comes out after the first. The fourth attack does the most due to its slow animation. Fortunately, you can cancel the animation once the damage has been dealt by using your dash.

Your charged attack should almost never be used unless you are mining. It consumes stamina during usage and does significantly less damage than any of the stages of your basic attack. 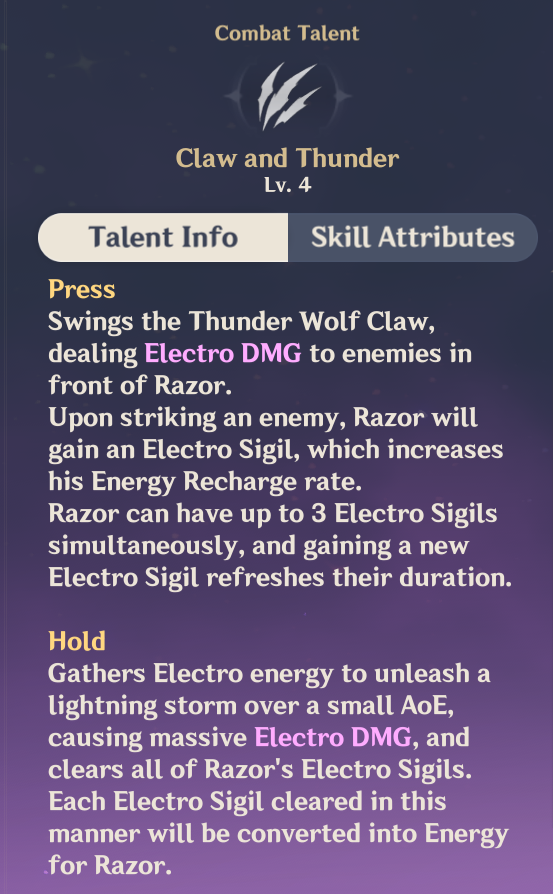 Claw and Thunder (E) packs a lot of punch (scratches more than punching). Upon using it, you will deal a significant amount of damage based on whether you press it or hold it; both forms of activation scale off your attack stat and Electro damage stat. Tapping the ability will deal less damage than holding it, deal damage to those in front of you, grant you an Electro Sigil, and incur a six-second cooldown. Holding the button will deal more damage than tapping it, but consume all of your Electro Sigils to grant more energy than tapping would and incur a ten-second cooldown. Each Electro Sigil you gain by tapping the button will increase your Energy Recharge by 20% per Electro Sigil, adding up to a total of 60%. Consuming them when using the hold function of the ability will regenerate five energy for each absorbed.

Eighty energy is required to use Lightning Fang (Q). 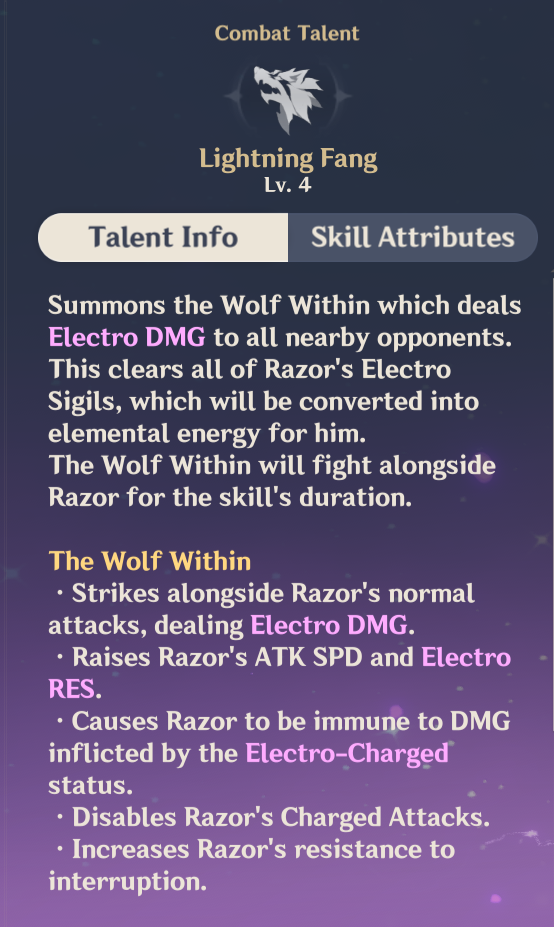 Lightning Fang (Q) is Razor’s ultimate, and everything you will want to be playing around. There is a reason Claw and Thunder (E) provides so much energy regeneration.

Upon activation, Razor will deal area-of-effect Electro damage, reset the cooldown on Claw and Thunder (E), gain attack speed and Electro resistance, immunity to Electro-Charged status, resistance to being knocked down, and will gain a wolf companion to fight alongside him for fifteen seconds. The big things to note about this ability are the attack speed and wolf companion.

The wolf companion hovers over your shoulder, similar to Sasuke’s Susano’o from Naruto or Stands from JoJo’s Bizzare Adventures. It will mimic each basic attack you do, dealing Electro damage separate from your physical basic attack damage. On its own, this may not exactly be strong, but thanks to the percentage attack speed buff you gain during the duration of Lightning Fang (Q), you will be attacking considerably faster and getting not only your basic attacks off fast, but also the damage the wolf deals while mimicking your attacks. This attack speed buff ties it all in together considering he is a two-handed weapon user that swings a bit slower than his one-handed counterparts.

How to Build Razor

As I mentioned above, Razor is capable of being elemental, physical, or a hybrid of the two. Though he can be any of those, this is important to remember: Razor is either meant to be in your party as your primary DPS, or not at all. His kit revolves around him building energy fast, using Lightning Fang (Q), and basic attacking until the ability wears off after fifteen seconds. After it wears off, you do as much as possible to gain energy to enter that state again. His style differs greatly from most of the cast, and due to this, you will be spending a lot of time on him instead of swapping to other characters to cause reactions. That is why you either go all-in on him, or leave him on the bench. But the reward of investing is most definitely worth it.

Razor can make use of quite a few weapons, and depending how you’re deciding to play the game, be it free-to-play, a little bit of money here or there, or breaking the bank, you will have access to some solid choices.

For those that got lucky with their free rolls, or those that broke the bank, these are the weapons you will almost always want for Razor: Rainslasher (gacha 4*), Wolf’s Gravestone (gacha 5*), Skyward Pride (gacha 5*). Rainslasher is the cheaper option, but is no slouch. You deal 20% (+4% per rank) increased damage against enemies afflicted by Electro or Hydro, the former always being applied when you are Razor.

Skyward Pride, the sword I use, feels like it synergizes best with how Razor is intended to be played. Unfortunately, I do not have access to Wolf’s Gravestone, but I am confident in saying that this sword can go toe-to-toe with it. It increases all damage you deal by 8% (+2% per rank). And after using an elemental burst — the Q ability — your attacks also send out a piercing vacuum blade that deals 80% (+20% per rank) of your attack stat as damage. This effect will last for twenty seconds, or until you send out eight vacuum blades. This weapon synergizes quite well with how fast Razor attacks and how often he uses Lightning Fang (Q) to activate it.

Now that we’ve tackled the weapons, let’s take a look at the artifacts. On Razor, you have a lot of freedom. The stats you will want to look for primarily are critical strike chance, critical strike damage, attack, attack%, Electro damage%, and energy regeneration. Due to how early into the game’s life we are, I cannot provide exact amounts and possible breakpoints and soft caps, but do your best to get as much as these as you can right now. For the prefix, you will want to actively avoid upgrading anything that doesn’t provide anything that I just mentioned. However, with the flower slot, you are only able to roll HP as the prefix.

In gacha games that often lock power behind expensive characters, Genshin Impact does a decent job of putting power in the free and/or affordable options. Razor, while not capable of fitting into any role (DPS, damage support, healer), is one of the best options for either free-to-play or pay-to-play users that want a character that is always in the enemy’s face. Where he lacks in composition flexibility, he makes up for in his own individual build flexibility.

As mentioned at the start, this is all based on personal opinion. I haven’t had the opportunity to dabble with Keqing and Diluc, but he is nothing short of impressive when compared to Jean and Mona. I am actively looking to get my hands on Keqing and Diluc to do comparisons, but I am satisfied with Wolf Boy in the meantime.

Tyler Lee
Tyler is a writer for Parallax Media
Previous