With FlyQuest looking like one of the best teams in North America in back-to-back splits, and Evil Geniuses unable to find stable footing resulting in a middle-of-the-pack finish, the series looked heavily favoured toward FlyQuest. The swap to Goldenglue and Huni had yet to yield consistent results, but if the Huni coin was to flip in their favour, then Evil Geniuses had a good shot at the upset. Unfortunately, the odds weren’t in their favour this time.

FlyQuest blew open the series with a worldwide unique pick in Swain. Swain received changes on patch 10.15 but saw no play during this time. In fact, Swain hasn’t been seen in professional play since Spring Split. With the professional scene moving to patch 10.16 for playoffs, seeing Swain make his Summer debut was a bit of a surprise. Despite only showing a few games of Swain on his solo queue accounts, PowerOfEvil came out swinging and ended the first game going 7/1/5 matching up against an Evil Geniuses composition we have all begun to expect out of them–an aggressive carry top, duelist jungler, and a wave clear and roaming mid laner. An imitation of Cloud 9’s style that was imitated from FunPlus Phoenix, the 2019 World Champions. It has been clear that the imitation of an imitation has not been paying dividends and Evil Geniuses desperately needed to adapt to win the series.

The second game would follow a similar draft from both teams. FlyQuest started the game with a clever level one and managed to sneak Santorin into Evil Geniuses’ red side jungle to catch an unsuspecting Zeyzal for first blood. They never wavered with their lead and used it to great advantage at 0:21:05 to decimate Evil Geniuses at the dragon pit.

.@SoloLCS grabs a triple kill in a team fight near the dragon pit as @FlyQuest take a commanding lead in game two against @EvilGeniuses! #FLYWIN #LCS

Every member of FlyQuest managed to put up a great scoreline and, in doing so, the team would end the game in twenty-four minutes and twenty-six seconds, setting the record for the fastest game of the post-season thus far. With what seemed like an Evil Geniuses not having an answer for FlyQuest’s top half, it was looking like an inevitable quick sweep.

The team rebounded, however, In the third game, Evil Geniuses changed up their game plan and dropped the recently buffed Hecarim that Huni had been playing in top for the first two games. While Hecarim wasn’t necessarily the problem, Huni’s Hecarim was. He looked out of sorts and was never able to find good engagements despite being handed opportunities that may have won them fights. With Huni on Gnar, a champion he seemed more comfortable on, the game was a lot closer than the prior two. The game wouldn’t proceed without mistakes, though, as Evil Geniuses made a catastrophic tempo mistake in top lane, dropping Herald only to have it killed before being able to take any turret plates. Not only did they lose the tempo of having secured Herald, they would lose a player in the process. What many would have assumed would be a loss from Evil Geniuses after such a mistake would continue to be a close game with many Baron dances.

FlyQuest seemed unwilling to take the 50/50 smite fights that would secure them the win, and ended up giving Evil Geniuses the time to find the perfect fight with a wombo combo of ultimates that would result in a four for nothing. With no threat of a steal, Evil Geniuses secure Baron following this fight and end the game shortly after.

After an extended back and forth near Baron, @EvilGeniuses find a crucial team fight in the mid lane which leads them to a game three victory against @FlyQuest! #EGWIN #LCS

Goldenglue and Huni finally made a case for themselves in this series as to why they should be the ones in the game as opposed to Kumo and Jizuke. Kumo, while a young talent with a potentially bright future, didn’t quite show that he had the highs that Huni brought to a team. You may not get the highs of Huni consistently, but he has the popoff factor that allows him to take the game into his own hands. Goldenglue is a little similar to Kumo in this regard, however, in that he doesn’t provide the highs that will backpack a team to the finish line. What Goldenglue brings is what you would expect from a consistent middle of the pack player. This game, however, showed us exactly what Evil Geniuses was hoping to see from this roster iteration after their win against Cloud 9 in the regular season.

Evil Geniuses would bully Solo’s Jayce in the top lane and add more fuel to the fire of the “NA Jayce” meme. Despite the not-so-great performance from Solo, Evil Geniuses would only manage to hold a slight gold lead. Their gold accrued would be off the backs of Huni and Goldenglue making great side lane plays. These two played excellently around LeBlanc’s side lane pressure and Shen’s global ultimate. It went unanswered for most of the game until Goldenglue was caught topside by a team wide commitment from FlyQuest. The rest of Evil Geniuses threw themselves into the fire, one by one, and allowed FlyQuest back into a game they had no right winning. FlyQuest secured Baron and took the fight to the dragon pit to attempt to shut down Evil Geniuses’ chance at Ocean Soul, but the fight went awry and Evil Geniuses secured it anyway. Though the game was near even in gold, with Ocean Soul in their pocket, Evil Geniuses had the edge in fights and would dare FlyQuest to fight them one last time at Elder Dragon. Acquiring it uncontested, Evil Geniuses got Baron and used both buffs to end the game.

With the game five anthem of Silver Scrapes being played, both teams were locked in for the fifth and final game. One game remained to determine who would continue their upper-bracket run, while the other would have to face elimination in the lower-bracket.

Just a few minutes into the game, Ignar roamed from bottom to mid and caught Goldenglue unsuspecting with a hook to secure first blood for PowerOfEvil, a much needed spike in gold for their mid lane Kog’Maw. Unfortunately for Evil Geniuses, this would set the pace of the game and they would never be able to regain control.

We’re off to a great start thanks to @IgNarLoL!

Santorin, as he was all series, was a menace in the jungle and had excellent neutral objective control. As both teams contested dragons all game, the smite fights would go Santorin’s way and FlyQuest threatened an early Infernal Soul that Evil Geniuses would have to contest if they wanted any chance against an AP Kog’Maw. At 0:25:50, Evil Geniuses started Infernal Dragon only to be stolen by Santorin, giving FlyQuest an Infernal Soul that they would use to secure Baron. Following the acquisition of Baron buff, FlyQuest marched down mid and closed out the series. 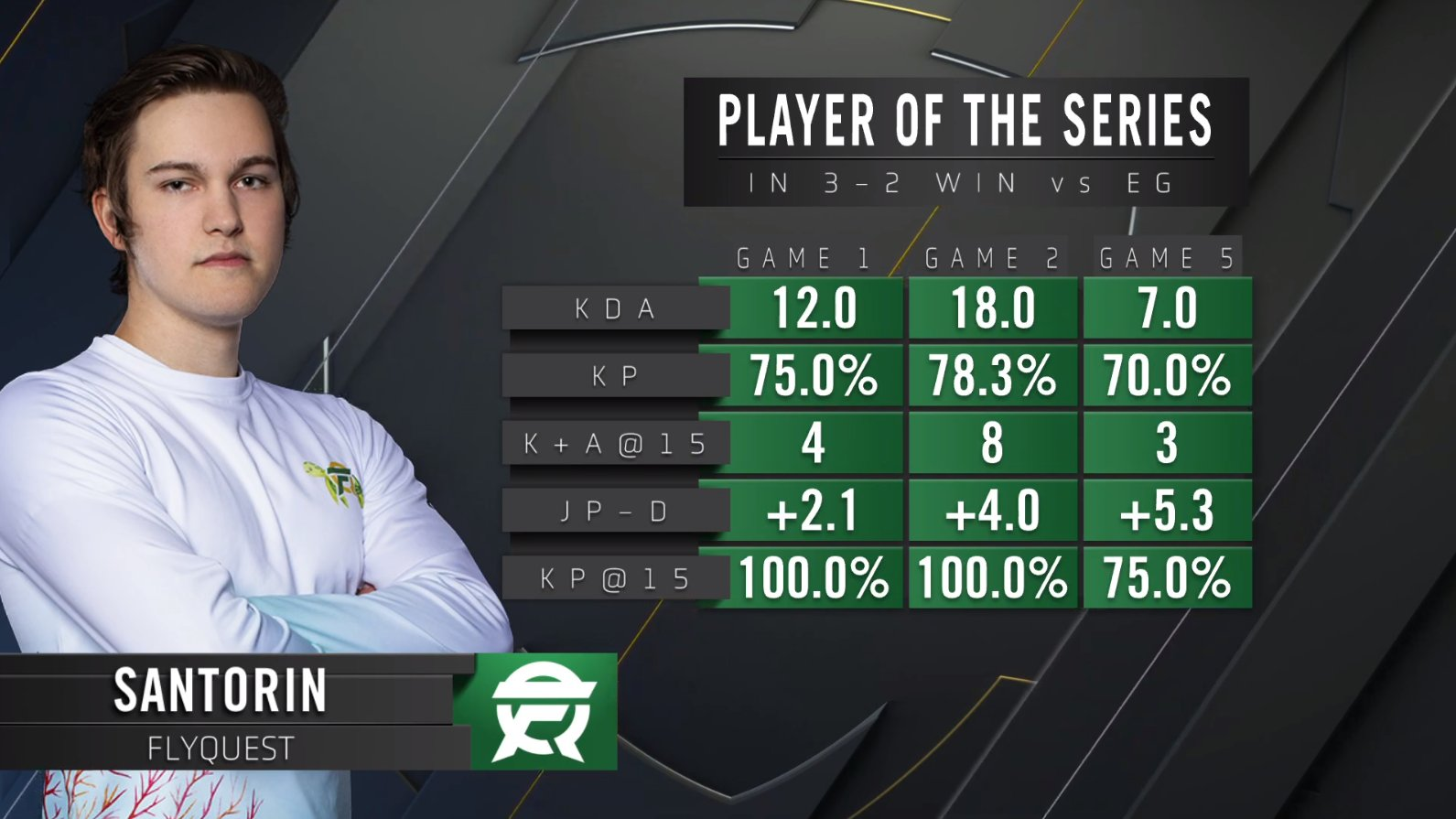 There are arguments for both sides, but this was a series I expected to be close before seeing the first two games. Evil Geniuses, despite their poor regular season performance, is a team with an exceptionally skilled jungler and ADC. If the rest of the map can keep up with them and consistently do so, their team is one that will be a threat. Unfortunately, the inconsistencies they have in their imports other than Bang are ones that may plague them in their lower bracket run. They face off next against a confident and warmed up 100 Thieves. If Evil Geniuses can attack 100 Thieves’ rookie support while also gaining control over Ryoma (a player many consider to be the weak link of 100 Thieves), they may very well find themselves in the next round. A showing like this against what many people consider the second best team in North America is a mental win they will need for their run.

With this win, FlyQuest retain their upper bracket positioning and move on to face the Spring Split champions. It is a series that is shrouded with uncertainty due to Cloud 9’s downward swing in the latter half of Summer. Despite Cloud 9’s slump, they were unable to find a win against them in the regular season and went 0-2 against them. Regardless of Cloud 9’s form, FlyQuest should be moving into this series with confidence. Not only did all their players perform exceptionally well throughout the series, Santorin put on a spectacular performance that furthers the narrative of him being the best jungler in North America. As the series MVP, Santorin seems to be the only jungler in the region that is able to go toe-to-toe with an on-form Blaber–the key to dismantling Cloud 9.

Tyler Lee
Tyler is a writer for Parallax Media
Previous

Rebounding, TSM Goes 3-0 Over Dignitas and Eliminates Them From Playoffs